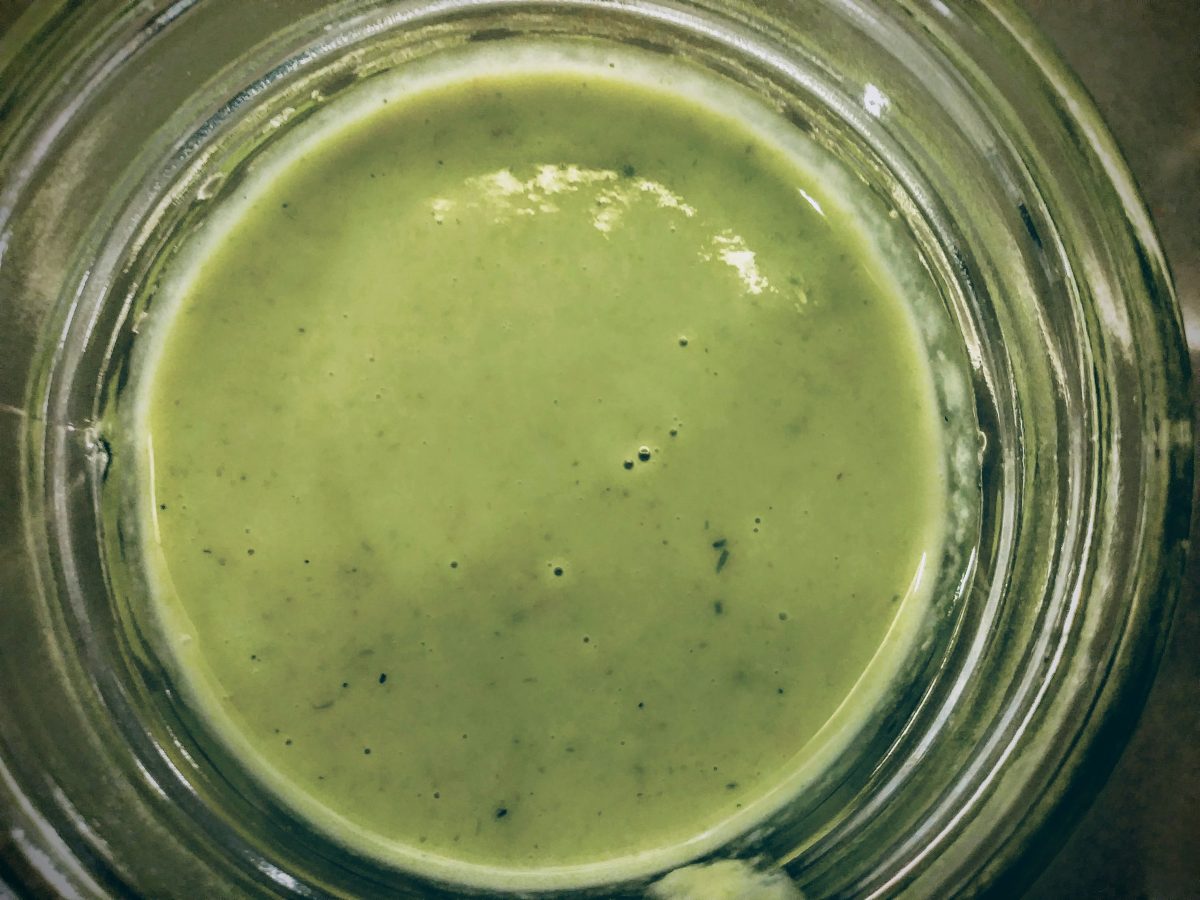 The adults in this household thought that this year’s asparagus wasn’t really that great. It lacked flavor. It seemed to mush quickly. It was really disappointing, because I love asparagus. I buy it seasonally only, because I don’t think that it’s right or fair to buy it off-season, as our culture has become accustomed to doing with just about all of our foods these days. But that is a story for another time. For now, let’s talk asparagus.

I found a bunch of large Michigan purple asparagus that was pretty good on the grill, and I knew it was better because, you know — asparagus pee. Nevertheless, after several attempts at doing something with mediocre asparagus, we gave up. I found one more bunch at Barden’s Farmstand in South Have and gave it a chance, but my husband was well over any fresh asparagus consumption. Something had to be done with this last bunch, so I dug deeply into my soup repertoire. Behold, the cold asparagus soup.

I became pretty excited about bringing out the cold soup, because a cold soup done well, with depth of flavor and just enough salt, is so, so good and refreshing. I made this with love and remembrance.

The first time I ever had a creamy — not cream of — asparagus soup came when I was living in Spain during college. I lived with a loving family, who became my extended family. My host mother was an avid home cook; she made excellent Spanish food. I watched and learned. However, the asparagus soup she made me actually came in a quart box. But it was so good. Pour and serve. Happiness.

Then later on, I made Julia Child’s vichyssoise of potato and leek, and Ina Garten’s vichyssoise with leeks, potatoes, and zucchini. I still make leek and potato soup, which I serve hot.

Finally, the most life-changing experience with cold soup came from the kitchen of the now-closed Sea Saw, Nobuo Fukuda’s amazing Japanese restaurant in Scottsdale. (Don’t worry. He is still still making food in Phoenix here: http://www.nobuofukuda.com/) They made a cold edamame soup that made my husband and me cry tears of joy. We still talk about his restaurant, his food, the service and staff, and that soup. It remains among our favorite restaurant experiences to this day. We have yet to try his not-so-new place. Someday.

Anyway, it was time to make some cold soup. As I chopped and readied, I played my neo-soul-inspired “Chill the Root” playlist, a list that began with D’Angelo’s “The Root” from Voodoo. The neo-soul genre was — and still is — a major player in the soundtrack of my life. I hit shuffle, because I like to shuffle what I create. It started with “Charlene” by Anthony Hamilton. Then came Robert Glasper’s “Cherish the Day” from Black Radio; Bilal’s “Sista Soldjah;” Eryka Badu’s “Tyrone;” more Anthony Hamilton, with “Cool;” some new Jose James. You get the idea.

I make much of my own base stuff for cooking — yogurt, bread, stock, milk. So wherever it says “homemade,” it’s just because it is. Buy or use what you have at home in place of any of the “homemade” items. Be creative. Cook and taste, cook and taste. Then blend. It will be delicious anyway.

PS – I suck at writing recipes, because I am an instinctual, creative cook. So, just grab the ingredients and go with your gut.

Anyway, to my Neo Soul playlist I groove, and in an effort to maintain the love for asparagus and make my husband eat it, I assembled and created the following.

You will need an immersion wand or high speed blender.

Lightly sauté the asparagus with the butter. Salt a pinch. Then add the shallot and cloves; sauté quickly. Add the zucchini and potatoes, salt some more to sweat them up a bit, and let them cook up a little. Then add the stock. Let that all cook through. Taste. Add salt if necessary. Add the stale bread and the dill. Let that hang out and get soft.

Serve warm or cold with bread and butter. Delicious.