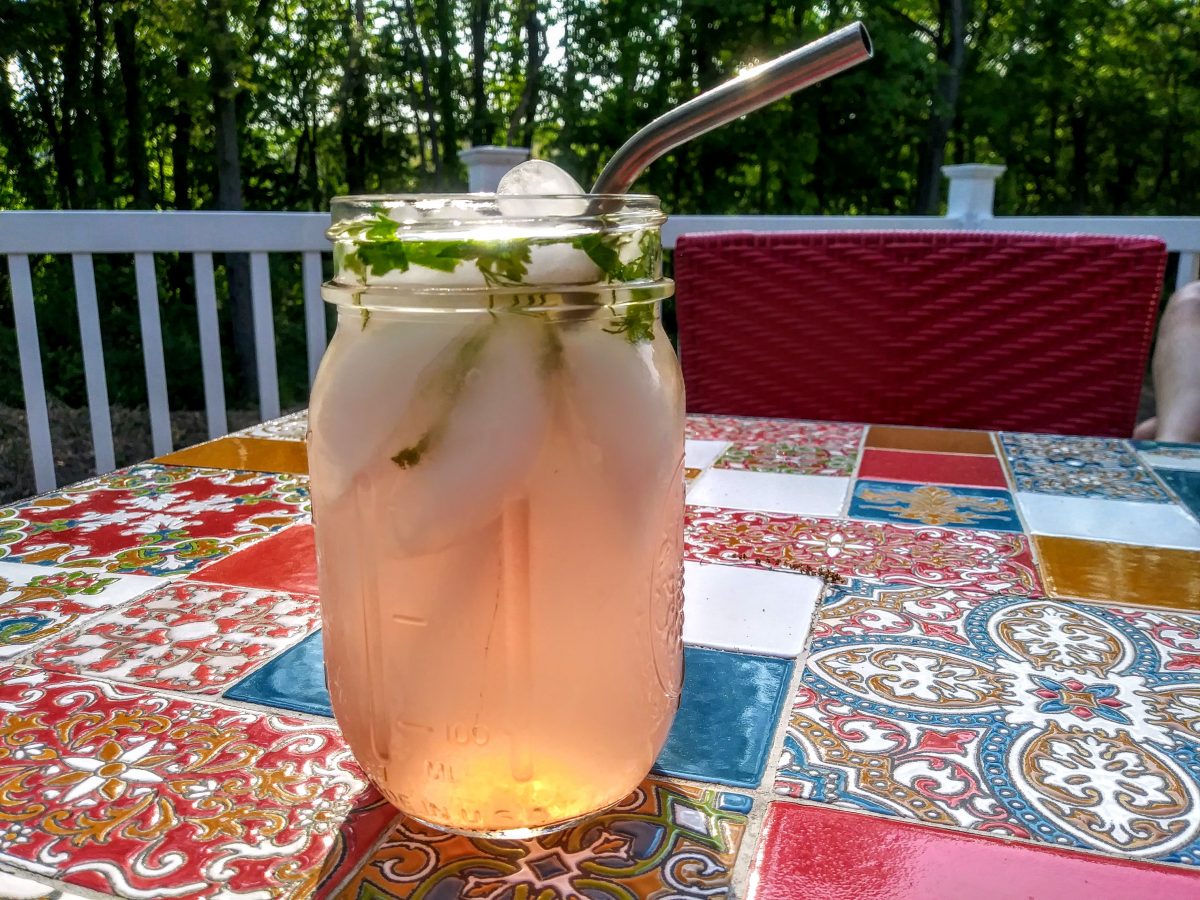 It’s that time of year again, when asparagus and rhubarb arrive, and we know, at least on the calendar and perhaps in our hearts, especially here in Michigan (#polarvortex, random April blizzard, perpetual June rain), that it is spring. I can begin to ease off on those winter vegetables and canned goods. Bright new colors fill jars on the kitchen counter and in the refrigerator, and I think again how grateful I am for renewal.

My favorite spring color is the pink of my rhubarb water. Years ago, I fell in love with rhubarb water and its pink hue while watching an episode of Laura Calder’s French Food at Home. I was so surprised that I had never heard of it. I have been making it ever since.

I make rhubarb water in lieu of lemonade, because rhubarb is seasonal and I can always find it locally, of course. Sometimes I use sugar, sometimes I use honey, and sometimes, for kicks, I use maple syrup. A mélange of flavor for the creative cook and tempted palate.

I also cannot resist — like ever — steeping fresh herbs in rhubarb water, for alongside those gorgeous new spring colors and vegetables come the herb gardens. Recently available to me at the market were all of my favorites: basil, dill, mint, cilantro. I muddle them all right into the rhubarb water with ice and honey (overnight, if possible, for maximum infusion and best results), and life is so good. I drink the pink garden.

Then, of course, there is lime or lemon to be added to it. I prefer lime, but lemon is also delightful. Steeping overnight works best here, too.

I bet cranberries would be amazing as well. And beautiful. With mint and a hint of sugar? A sort of rhubarb julep? Yum.

And then, of course, there is the addition of very cold, very delicious gin, vodka, rum, or most definitely a sparkling wine or prosecco. I prefer a more vocal gin, such as Hendricks, or, if using vodka, maybe something like Belvedere, or whatever you prefer will do just fine. Gin it is for me, with all of the accoutrements of herbs and sweeteners. I have added slices of a serrano and bell pepper, which, as you may guess, is delicious if you like heat and pepper flavor.

Lately, I have been thinking about it as an electrolyte drink. Without the alcohol, of course, but keeping the herbs if you would like and with a sprinkling of kosher salt with the citrus and sweeteners, you have a pretty and refreshing homemade electrolyte replacement for after a run, a lift, a brisk walk, or after you have not felt so well.

I have come to love it so much, though, that I just drink it cold and straight and sour in all its natural pink glory. I love rhubarb water.

My M-W Word of the Day is nectar. Rhubarb water is my spring nectar.

It makes me think of my Midwest roots. As a kid, I didn’t really know what rhubarb was, but it was always available, abundant. My people didn’t necessarily use it often either — at least this is true in my memory. But it was always around. Although rhubarb pie is the main event for this oft-created, fruit-seasoned vegetable pie, it is wasn’t part of my food history. No, rhubarb came into my life via rhubarb water. It is my spring drink, my spring awakening, and now part of my personal food history.

But rhubarb is the vegetable of our childhood, at least in the Midwest, as noted in one of my favorite Prairie Home Companion stories called Rhubarb. Jokingly, it was overlooked by all peoples except the Norwegians; the Norwegians figured out what to do with sour.

It’s the story of Dorothy, who makes twenty-five quarts of frozen rhubarb for the week for her rhubarb pies that she sells at the Chatterbox Cafe, but it doesn’t last, because “it is so damn good.” Yet, “the woman who can make the best rhubarb pie west of the Mississippi doesn’t care for it. She prefers pumpkin … which is nothing but an excuse to eat nutmeg.” It begs the question: “How can the bringer of such good things derive no enjoyment from them herself?”

The story goes on about Pastor Ingqvist, the weary Lutheran minister who has lost the oomph to deliver the usual, traditional Christmas service that the congregation knows and loves. He just wants to go to Florida. A similar question applies: “How can the bringer of good things stand with a wooden heart, unable to enjoy what everybody else enjoys?”

In the end, Pastor Ingqvist goes to the Chatterbox Cafe with his Florida secret and has the last piece of Dorothy’s rhubarb pie. She knew he needed it because of the forlorn look on his face. The pie is so good it brings tears to his eyes. She said, “People have been telling me it’s pretty good,” but of course she doesn’t know, because she doesn’t eat it. But Dorothy has her own secret: she sits in the back of the Lutheran church during Pastor Ingqvist’s sermon, and it brings tears to her eyes. Finishing the pie, Pastor Ingqvist asks, “Do they have rhubarb in Florida?” Dorothy says, “No. Rhubarb is only in Minnesota.”

I love that story.

Rhubarb. The humble vegetable of the Midwest. A harbinger of joy.

Rhubarb is high in vitamin C, vitamin K, potassium, and manganese, and so I feel good about adding it to our yummy list of seasonal staples, and there is simply therapy in its steeping. Although I love any pink, ripe rhubarb stalk, my favorite is Canadian red rhubarb, also known as Chipman’s Canada red rhubarb. It is super red-pink and superbly sweet, and it is the most delicious. Old farmer friends of mine sell it at the Holland Farmers Market, and have been doing so for years. It sells out well before the end of market Saturday. Because it is so damn good. It’s happy rhubarb.

Writer, storyteller, kitchen mistress, minimalist, unschooling mom, president of my huzband’s fan club, spiritual enthusiast, linguist, and painter. Oh, and let’s not forget about seeker. Currently deschooling still. Winner of no major awards. Happily enjoying solitude, jazz, soccer, and Monty Python with a glass of wine from the comfort of my sofa in furry slippers, while I await my next travel journey.