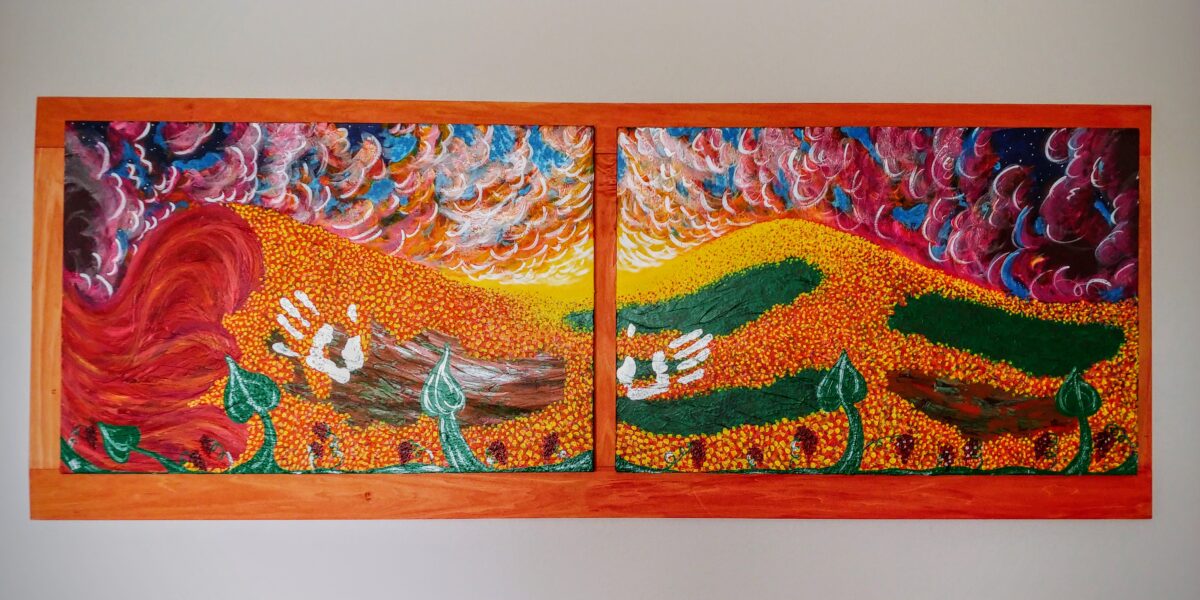 Angelica — a painting I made in 2005 — hangs in our bedroom, that of my husband and me. She always has. Originally and often, she was placed above the bed, acting as headboard and spiritual guide of our lives. Later, we wanted to be able to see her and contemplate her more, so we began to keep her alongside our bed on another wall in order to take her in.

Currently, she hangs on a southeast wall in our bedroom still, illuminated by the light from windows opposite her, daylight, sunsets, starlight, and moonlight included.

As I was making the bed the other day, I noticed her differently and thought of her anew. I realized that I had arrived, that the forecast of the painting had come to fruition, and I felt settled and at ease.

At first, I painted her as a gift for my husband, who back then was still my boyfriend. We had reunited after six years apart. Love remained, an understanding of something wanting and familiar. Yet we had to kindle a refreshed version of ourselves together, building on a foundation with faith and trust that had to be practiced.

At one point, I am quite sure that both of us wondered if this was really the right move, to be together. History and old wounds tested us greatly. Could we trust each other, ourselves? Were either of us falling into old traps or habits? Did we know red flags from a leap of faith?

When I came to, so to speak — when I had decided to go all in and commit — I painted Angelica. And I say I painted her for my husband, but I also painted her for me, for she is me, is about me, and love, fertility, rest, knowing, warmth, understanding, healing, and recovery. I was trying to tell him what I finally knew, that I was here and ready, that I know this now — albeit unsteadily at times — about myself presently and in the future. I am speaking to you through her, about her, telling you her story and mine and about all of the glorious things to come.

And when I began to paint her, I could not stop, at first shaping her body with globs of paint on my hands, smearing, smoothing, curving. Then came the earth and greenery, the sky, clouds, and stars arriving with many brushstrokes. And then the dots: I relentlessly painted the yellow dots of fields of flowers up and over the rolling hills, blending and disappearing into the sunset, her midsection, the valley of her body. I painted every moment I could, even leaning over my bedside late into the early morning hours — almost obsessively dot, dot, dotting away — until she was done.

But in order to get this secret and surprise painting to him, my then-boyfriend, I sent him on a “wild goose chase,” as it were, for his birthday, a sort of scavenger hunt. I went to a few favorite watering holes, left several small gifts for him with the various bartenders, departing just before he arrived, finally meeting at a last place for a final gift and dinner, and then back to his flat, where hanging in waiting above his bed was Angelica.

“Angelica” is a song by Lamb that we listened to back then. Ellington and Coltrane also recorded “Angelica,” a song that has a more appropriate vibe and tempo for the goings-on of our lives now, bopping around in the kitchen like we do, but the Lamb version was more fitting at the time, the summer of 2005, when we just were beginning a renewed version of us as a couple. It has a driving quality to it, a forward motion. My husband was listening to it in the vehicle when he picked me up after our scavenger hunt and drove to the flat. It was loud and all-consuming in his fancy little convertible. He meant it; I meant it. We had work to do, but this was it.

Leading up to that point, I was sort of a hot mess. I had been searching for a long time — for home, for understanding, my tribe. I had been trying for decades to navigate the legacy of abuse and trauma; the various meandering points and pivots of stream and path and identity; as one full of wanderlust and as seeker; testing, failing, succeeding.

I knew only two things most of my life: I wanted to be free and to find Right Love.

I had chosen me months prior, maybe for the first time ever — that is to say, I had packed up my stuff in the Midwest, hauled it in a little 6′ x 12′ Uhaul across the country, and moved to Scottsdale to be with him, turning my back on people for and to whom I felt responsible and obligated. And for awhile, traversing all of those states in between Michigan and Arizona, through mountains and winds and storms and long, lonely highways, I felt whole and happy in my travel-adventure-aloneness, free and light and on the wind. All mine — my story, my time, my effort, my fears, my concerns, my freedom, my wonderment, my life soundtracks on CD.

Choosing him meant choosing me, and freedom, and Right Love. I honor the leap of faith I took and trust I had in my myself, my resilience and self-reliance. I am indebted to that journey.

And Angelica tells the story — that part of the story — in whimsical, acrylic blends and through all of her curves/rolling hills, her vines/fertility, her resting body/the earth, her relationship to the cosmos and creation, her hands touching heart and lower back, her colorful life, her healing. More.

I know that my husband can see me, and he can see me through her. Can you see her? Are you able to see a woman’s resting body that is one and the same as the resting earth, the rolling foothills, her hair blending with clouds and starlight? Can you see her fertile ground? I can only see her and her connection to all things. We are all one and the same, made of starlight, grounded on Earth, vibrating endlessly and eternally into the cosmos.

Angelica was letting us both know where I was and who I would become, and I reiterate: I feel like I have arrived, finally.

We are in Idaho now, indefinitely, where fertile foothills of Boise meet the sunsets and dark skies. I know that I am practicing resting and healing. I am recovering. I certainly am full of color, as well as fertile in mind, heart, body, and soul. I think all of these ideas are true.

It is loving and encouraging.

I’ve known all along.

I am glad to know that I have known.

I am happy about her.

She is my glorious story.